I will admit that I was not really expecting the differences between the online culture and real world culture.

How does online culture differ from real world culture?

Well, for starters, everything really important online is through text. While the images and actions you take in the virtual world are fun and pretty and provide a lot of entertainment, what you’re communicating is actually more meaningful. Where in the real world, being able to meaningfully smack a paddle into your palm can punctuate a sentence, turning a tease into a threat, in the virtual, you have to take the time to actually spell out what you’re saying and doing. Having good storytelling skills becomes very, very important. You also need to keep in mind that everyone behind an avatar is an actual real human being. It’s easy to loose sight of that, but in the virtual world, it’s very deeply important to remember that those are in fact actual humans, so being a douche at a BDSM club online isn’t as much of a consequence free goof as you may think.

Online, because of all the animated furniture and RLV enabled scripts, it’s possible to mis-click and make a major faux pas. If you accidentally click on a bit of furniture that someone else is using, you can wind up in some deeply compromising positions

with them. And here’s the important part: if you didn’t ask for permission before you try to share a chair with someone, in the virtual world you’re committing the equivalent to assault. People around you will absolutely respond to what you just did, even if it is an honest accident, as if you’d done the same thing in the real world. An example: There’s a chair that if one person sits in it, you can get some cute poses. But, if someone else sits in the chair with you, it defaults to some sudden and surprisingly intimate sexual positions. If a Mistress is in a chair, and you ‘join’ her without asking, it’s the same as if you did that in the real world. Try sitting in my lap in the real world so you can grind your dick on my tits, and you’ll find out how quickly you’ve made a huge mistake.

As for me? I’m adjusting to the culture shock really well! 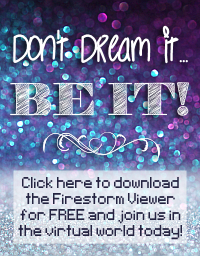